The interaction between word and image has developed into a mature field of study. Advertisements, in particular, are a beloved subject for investigators in the field. Close inspection reveals remarkable differences in the way commercial messages are set up. Sometimes the relation between words and images is vague, more than simply combining the two to get the message across. It’s not easy but is definitely achievable. Combining is a matter of practicing.

The academic discipline of modern linguistics began to develop in the 18th century. For more than a hundred years, general linguistics (structure and practical usage of language) has been studied in a systematic way. In the last century, structuralistic approach, generative grammar, sociolinguistics, systemic functional linguistics, modern psycho-linguistics have all been incorporated into the field. Terminologies, theories and research instruments exist.

Within linguistics, verbal metaphors are an interesting (sub)theme: they reveal much about how we think. Metaphors are much more than just embellishments of our sentences, handled by poets and songwriters. Lakoff and Johnson, leading experts in the field of metaphor research, state firmly that we couldn’t express even the most common notions without them. Their book, Metaphors We Live By (1980), has become a classic in the field.

In a metaphor, two subjects are connected, according to Lakoff and Johnson. There is a source, for example a bear, and there is a target, such as the country of Russia. So in a metaphor, Russia might be represented as a bear. Often the source is concrete, and the target is abstract. Second example: aspects of a journey can be used when we speak about life in general. Sentences such as ‘He got lost’ or ‘He reached his destination’ say something about a genuine travel, but also about someone’s life as a whole. So, many points of travelling are mapped on the more abstract subject of life in general. 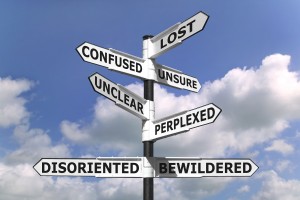 One can imagine that this way of speaking influences the way we think about the more abstract subject. The idea of travelling intertwines with our image of life. Should we choose another source for our metaphor, we would get another picture of life.

So far, questions and answers have remained wholly within the domain of written and spoken language. In the last 20 years, however, students of linguistics have extended their subject to also incorporate visual images. Regularities noticeable in the language of words are also present in the language of visual images. For example, during many years the Dutch airline KLM had a visual campaign in which airplanes were compared with swans. The swans were the source, and the airplanes were the target. By the way, animals are often handled as source in a metaphor: bears, horses, tigers, elephants, snakes – we have strong ideas about them, which gives many possibilities.

A combination of words and images is used in many contexts, such as cartoons, paintings, street art, infographics, and logo’s. But advertisements are especially attractive to researchers because here the message is very clear: the product has to be sold. On the other hand, a good piece of art has more than one dimension. If there was only one message, it would be bad art.

Mariana Bolognesi is an Italian linguistic researcher working at the Amsterdam Metaphor Lab. She has built up a large collection of word-picture advertisements. By looking closely at the commercial enunciations, she has noticed remarkable differences in the way words and images are used. She expanded on this in a recent presentation at the Instituut voor Beeldtaal.

First, an advertisement with only pictures and no words is very rare. You need a really well known image, for example a bottle of coca cola, to be understood without any words.

Second, advertisements often contain a certain incongruity. You notice something strange, a sort of riddle, which has to be solved by looking longer and closer.

So, words are part of it, nearly always. However, in some cases you can ignore them. If you see a cigarette between a row of bullets, then even without words the message is clear: cigarettes kill. In general, anti-smoke campaigns are interesting material for language research. Imagine a picture of a bullet accompanied by the word ‘quick’, together with a cigarette accompanied by the word ‘slow’. Also here the message is clear, without the specific word being mentioned: a bullet kills quickly, a cigarette slowly.
On the other hand, sometimes you need the words to solve the riddle. What is the meaning of a horse standing on his hind legs with a glass of champagne on his nose? We see the Volkswagen-logo plus the text ‘Powerful with natural balance’.

But using a metaphor is not without danger. A source domain can invoke different associations with different people. For example, what does a swan mean for you? Do you see elegance, as KLM wants you to see? Or do you see aggression? Countless advertisements have been withdrawn because of unintended associations.

At the end of Bolognesi’s presentation the attendants were asked to do-it-yourself: to add words to photographs to result in an anti-smoking message. We give some results.

What did they add to a picture of an Asian looking man, probably lying in the Dead Sea, with his thumbs upright? ‘At least I do not smoke’.
To the picture of a clock? “Kill your time or kill your body?”
To a number of upright standing cigarettes casting long shadows? “15 shades of death”.
At last, a small human figure deep in a narrow pit: “Give me a light at the end of the tunnel”.

Perhaps a picture says more than a thousand words. Metaphors in the form of a junction of word and image have a richness in meaning and complexity. They are not easy- but communication has never been a cup of tea with a piece of cake.